The Disease That’s Hiding in Your Shoes – And Why You Can’t Get Rid of It!

Yes, all sports people suffer from battered toenails, but then there’s that discolouration that seems like nothing at first but over time you realise – it’s just not going away – and slowly your once healthy toenail begins to disfigure, which is not great when summer rolls around and those flip-flops come out! 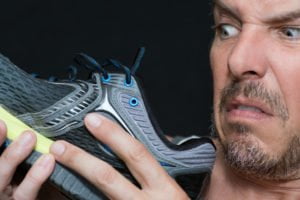 This discolouration, which is yellow in appearance, is what’s known as Onychomycosis – a fungal infection of the fingernails or toenails that causes thickening of and separation from the nail. And if you have it you’re not alone – an alarming 10% suffer from this troublesome condition!

Unfortunately for all sportsmen and women, the disease affects toenails more often than fingernails because of the fact that they often do damage to their nails, and their feet are often confined in dark, moist environments like socks and shoes where the fungus is lurking.

Treating this infection isn’t easy because of the nature of it, and as the disease progresses your nails become brittle, with pieces breaking off and start to produce a foul smell. If left untreated, the increased thickness of the nail makes wearing footwear very painful, in turn making running less than pleasurable.

The biggest culprits that cause Onychomycosis are: trauma to the nail – like constantly stubbing your toe against the front of your shoe, which loosens the nail plate; places like communal change rooms that feeding grounds for bacteria; diabetes (sufferers are more prone to infection); hyperhidrosis (a condition where you sweat a lot more than usual) and smoking.

What About Treating It?

A recent study in the Journal of Academy of Physicians on current trends in diagnosis and treatment of this fungal infection, found that oral antifungals are the most effective, while topical therapy is less so – with a failure rate exceeding 60%! Several non-prescription treatments were also evaluated in the study like laser and photodynamic therapies, and although they show promise, more clinical studies are needed to prove they work.

Despite all of these treatments, the recurrence rate of onychomycosis is 10% to 50% as a result of reinfection or lack of mycotic cure.

There are a number of reasons we cannot get rid of this nasty problem, but the biggest factor is that we are wearing the shoes and clothing that is carrying the spores of the fungus! So decontamination of footwear is imperative with all treatments as the microorganism is resistant to ordinary washing or airing of footwear.

Local podiatrist Karin Brückner deals with these foot infections daily and notes that, “fungal and bacterial infections often return due to bacteria or fungi clinging to everything from shoes, socks, underwear and towels to floor mats and linen. It even survives long washes in hot water with detergents.”

Realising a need for a solution, Brückner, along with leading scientists, has created a power pack of breakthrough treatments, which are now widely used by podiatrists, dermatologists and beauty therapists. The pack consists of Medipod Foot Repair Cream – a daily foot cream to moisturise, exfoliate and strengthen skin, as well as combat fungi and bacteria and the odours these infections cause. The Foot Repair Cream, combined with revolutionary product FungiSolve – a concentrated detergent that decontaminates and eliminates all bacteria and fungus your shoes and clothing – will make sure there is no reinfection!

If you want to know more on how to deal with stubborn toenail infections and be rid of them for good, then visit www.medipod.co.za.

For more information on Medipod, comments from Karin Brückner, or to test products please contact info@medipod.co.za or call +27 (0)21 465 6124.