Proud Moments for South Africa at the 2017 IAAF

Your heart is beating at a crazy pace, your breath is erratic, and your lungs are struggling to keep up.  You are not sure if you can stand it anymore.  The pressure is immense.  The crowd is going mad.  But, there are only a few metres to go before the finish line will speed by under foot.

All this and more, right from your comfortable seat on your couch, with the IAAF World Championships in full force on your telly.

The life of a professional athlete seems quite glorified, much like any other public figure may be.  But, there is hard work, blood, sweat and many tears, before they can get to that heart pumping race moment.

While most eyes were on Usain Bolt’s 100m final, which was to be his last Olympic race, other patriotic South African’s were getting ready for our super stars.  In that 100m dash, our own Akani Simbine finished in fifth place at 10,01 seconds, and while it didn’t get him a medal, it really is not a shabby time at all.

Caster Semenya, with all the bad publicity over her gender, has managed to stay focused throughout her career so far.  Super Sport reported on the breath-taking and nail-biting final of the 800m, where Caster seemed to be falling behind, but then shot to her third position in the last 200 metres.

She speaks of her pre-race ritual and how music and faith have pulled her through the toughest of races and training regimes.

Other South African stars, at this years IAAF, also showed what they were made of.  Wayde Van Niekerk, the golden boy, managed to keep strong, and qualified for the 400m final race.  He was pushed hard from the start by Botswana athlete, Baboloki Thebe, but Wayde held on and came first with a time of 44,22s.

Later that Tuesday, Wayde stood tall and proud at the final 400m, and before we knew it he had crossed the finish line, seemingly with little effort.  His winning time was 43,98s and although there was some controversy on the open lane, which was to be occupied by the Botswanan Isaac Makwala, who took ill just before, Wayde accepted his win with a humble smile.

Long jumpers, Rushwahl Samaai and Luvo Manyonga, also did us proud, by taking the bronze and gold respectively in the men’s long jump.

Luvo was heard saying, “It has been a great year when I started the competition I felt a lot of pressure to win because I have been leading the whole year so people expected a lot from me and I did it the way I want it to happen.”

In the marathon, South Africa did feature three, namely Sibusiso Nzima, Lusapho April, and Desmond Mokgobu, bringing us our first two medals in IAAF, but pipped at the finish line by Geoffrey Kirui of Kenya.

No matter the medal count, we are very proud of our athletes and look forward to seeing more from them soon. 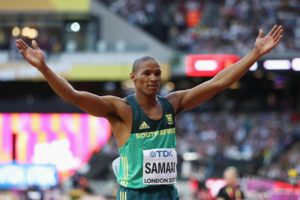 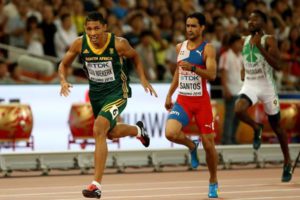 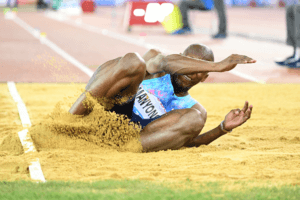 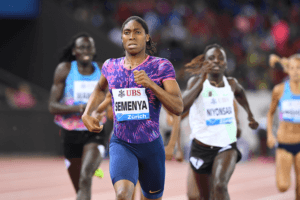