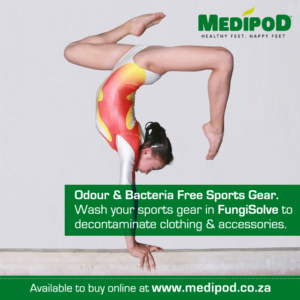 No matter how often you shower or how clean your home is, you can’t help but to coexist with bacteria. They live on your skin and in your body, but don’t try to eradicate them all however. The right balance of friendly bacteria can help protect us from such problems as inflammatory bowel syndrome, ulcers and tooth decay.
FungiSolve gets rid of all bad bacteria in your clothing, so even if you sweat it doesn’t cling to the clothing which gives you that terrible B.O smell! It also gets rid of bacteria on your floors that cause that black mould which makes you sick (mostly found in wet/humid areas such as Kwa-Zulu Natal).
Healthy skin, for example, is home to a diverse array of normal flora.
Scientists at the National Human Genome Research Institute have identified about 1,000 different species of bacteria living on it (compared to about 500 to 1,000 species of bacteria who call our gut home) [Source: Grice].
The ratio of microbes to skin cells is about 10 to 1, and the most common species on our skin is the Staphylococcus bacteria, including Staphylococcus epidermidis and Staphylococcus hominis. You’ll also find Propionibacterium acnes, which causes acne, along with Micrococcus luteus, Arcanobacterium haemolyticum, strains of Brevibacterium bacteria, and bacteria from the Corynebacterium and Dermabacter groups.
Bacteria are also the source of body odour. Surprised? We blame sweat for our odour, but what you smell after you work out or when you’re stressed is the odour of bacteria metabolising the sweat, not the sweat itself.
Our bodies produce sweat from two different types of glands, eccrine and apocrine. We have about 3 million eccrine glands, which are found in our skin and secrete sweat to cool our bodies. This sweat is mostly made up of water and salt. Apocrine glands work a little differently. There are about 2,000 of these glands, primarily found in our hair follicles. When we’re stressed (physically or emotionally) they produce a sweat rich with proteins and fatty acids, including a carbohydrate called sialomucin. Sialomucin is a glycoprotein, a protein that has a sugar coating.
Many bacteria have a sweet tooth, and monosaccharides (simple sugars) such as glucose are a go-to food source. Through a process called cellular respiration, the bacteria on our skin break down the sialomucin to be used as a source of energy. Depending on the type of bacteria, this energy could be derived by fermentation, aerobic respiration or anaerobic respiration. A byproduct of bacteria metabolising our sweat is body odour.
Different bacteria produce different odours as they digest sugars. Bacillus subtilis and Staphylococcus epidermidis, for example, contribute to foot odor [source: Ara et al]. S. epidermidis is one of the species that contributes to underarm odor, along with Corynebacterium xerosis and others [source: Dumas et al].
For most people, over-the-counter deodorant, which makes the underarm area less hospitable to these and other bacteria, is enough to prevent body odour but if the smell persist, especially in your sports gear, then clean with FungiSolve to get rid of the reoccurring odours.
MedipodSA2014-05-10T17:43:44+02:00